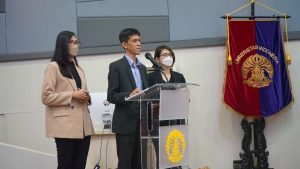 In an effort to counter radicalism, the government needs to collaborate between institutions/ministry and non-government, such as religious leaders, community leaders, community organizations, and the community itself. “Radical developments and terrorism have developed, even reaching the political order, for that it is necessary to prevent them by collaborating with various points of view, one of which is effective administration science to solve problems that occur in society,” said Stanislaus Riyanto in his doctoral promotion in Administrative Sciences, Faculty of Administrative Sciences, Universitas Indonesia (FAS UI), with the dissertation titled “A Model of Collaborative Governance in Preventing Terrorism in Indonesia” on Tuesday (28/06).

Research conducted by Stanislaus yielded several interesting facts that caused collaboration in preventing terrorism in Indonesia was still not optimal. Among them is the unequal understanding between the parties involved in the collaboration.

“Another finding is that the understanding and capacity of government officials regarding the prevention of radicalism and terrorism from the parties involved in the collaboration is still lacking. Another problem is the issue of budget and the legal basis for parties other than the National Counter-Terrorism Agency to be involved in preventing terrorism which is considered not strong enough,” said Stanislaus.

On the other hand, the prevention of terrorism in various regions is considered quite good. For example, the prevention of terrorism that occurred in Central Java. Stanislaus said that the strong leadership of the Governor of Central Java made the space for radicalism, especially those that occur through educational institutions, to be suppressed.

In addition, the relationship between parties involved in preventing terrorism in Central Java is managed through the Terrorism Prevention Coordination Forum, this step can be a reference for other regions. He further added that the involvement of religious leaders in collaborative efforts to prevent radicalism was also very important.

In his recommendation, Stanislaus said that this collaboration must be equipped with a proper budget, indicators of work success, and clear targets. In addition, it is necessary to increase the capacity of the parties involved in collaboration, including the community so that collaboration in preventing terrorism can be optimal.