In recent years, there have been events that have sparked global tensions, such as Russia’s invasion of Ukraine and the trade war between the United States and China. Researchers from Griffith University, Prof. Andrew O’Neil, who was one of the speakers in Universitas Indonesia (UI) International Conference on G20 said that through the G20 activities, global tensions are trying to be eased. As the host of the 2022 G20 Presidency, Indonesia seeks to embrace every group to build a better world. President Joko Widodo gave direct invitations for the Indonesian G20 Presidency to Russia and Ukraine. This shows Indonesia’s neutral attitude for not taking sides with any particular group.

In addition to solving economic problems, issuess related to politics are also discussed at the G20 event because they determine the direction of the global economy. “President Biden following President Trump’s policy towards China apparently affected the G20 meeting. The conflict between Russia and Ukraine has also exacerbated the current polarization. In this case, Indonesia is well positioned by not taking sides with either party. This impartiality is a momentum to restore the strength of non-aligned countries in easing global political tensions,” said Prof. Andrew. 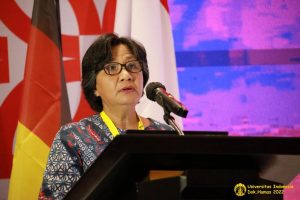 Prof. Evi Fitriani, Professor of the Faculty of Social and Political Sciences (FSPS), agrees with Prof. Andrew’s statement. According to Prof. Evi, the position of the G20 Presidency held by Indonesia this year is full of global challenges.

Also discussed are environmental issues and gender equality that have always been echoed, and geopolitical issues that has created uncertainies around the world during 2022. Moreover, the ongoing conflict between Russia and Ukraine has also affected commodity prices around the world.

These circumstances require Indonesia to carry out creative and innovative diplomacy to connect various world powers in its peacekeeping missions. Indonesia’s flexibility in conducting diplomacy also determines the success of this year’s G20.

The efforts made are expected to support the continuitiy of G20 as a successful global economic forum. “In the G20 Presidency of 2022, Indonesia has an interest in maintaining the G20 organizational process, both in terms of finance and the Sherpa Tracks. This interest stems from the realization that the mechanism of cooperation through multilateral organizations such as the G20 will strengthen governance and global solidarity in facing challenges that might occur in the future,” said Prof. Evi.

In addition to Indonesia’s geopolitical position, at the international conference held by UI on Thursday (16/6), the perspective of one of the world’s powers, namely China, was presented in viewing the urgency of the G20 for its country. According to Prof. Zha Daojiong from Peking University, China views the G20 as a strategic event to enhance global cooperation in dealing with various challenges that are currently engulfing the world.

This is because the G20 does not only discuss economic problems, but also various global problems from various sectors by presenting a global consensus. Departing from these thoughts, China sees the G20 as the right venue to express its anxiety about the global conditions that are happening these days.

Regardless of the bias given to China, there are three main things that China would like to discuss. First, the conflict between Russia and Ukraine, which not only affects both countries, but also affects the global distribution of goods.

Second, related to the perception of the West against the world other than the West. This arises as a result of the efforts of Western countries to impose various values on other countries that are not necessarily compatible with that country. “Lastly, accommodation to the emergence of epistemic communities based on various scientific expertise as a way to strengthen global preparation in dealing with potential threats that arise in the future,” said Prof. Zha closing his presentation. 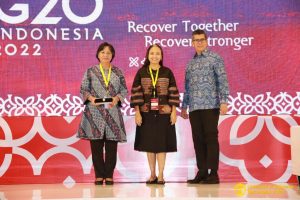 Discussions in this international conference are carried out in multi-sectoral ways to find solutions in solving global problems. The various issues raised ultimately lead to aspects of global policy and politics because they influence each other.

By the theme of “Boosting Indonesia’s Role in G20 Presidency 2022”, the results of this discussion will be an input for the government in the implementation of the Indonesian G20 Presidency. This series of conferences was held for two days at the JW Marriot Hotel Jakarta and was broadcast live via Zoom and UI’s Youtube channel.