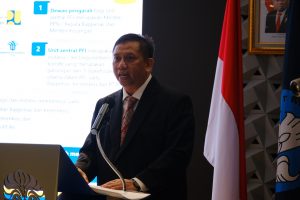 A doctoral dissertation by Ir. Moch. Yusuf Hariagung, M.M., M.T., inspector at Ministry of Public Works and Public Housing who has recently earned his doctoral degree in Civil Engineering from the Faculty of Engineering Universitas Indonesia (FTUI), sought to address the lack of housing available to a significant part of Indonesia’s increasing population. His dissertation is titled “Institutional Development in the Procurement of Housing for Non-Fixed Income Workers in Urban Areas in Indonesia through the Formation of Private Finance Initiative (PFI) Central Units in Reducing Housing Backlog” (TL note: the English title given above is a translation made by the translator from the title given in the Indonesian version of this article, and therefore may not reflect the English translation of the same provided in the paper by its original author [i.e. Dr. Yusuf]).

“The lack of inhabitable housing also contributes to the expansion of slums in cities. The Ministry of Public Works and Public Housing is able to fulfil only 30%, or about 400,000 units a year, of public housing demand. This amount is still a long way from the demand for housing in Indonesia, which amounts to 1.46 million units per year. In order to deal with this issue, alternative funding for the provision of housing infrastructure from private bodies or businesses is needed. One of such alternative funding schemes is the Private Finance Initiative.”

A global trend of rapid exponential growth not accompanied by stable housing supply has been the cause of a housing backlog, defined as the difference between the amount of available housing and the amount of families who has secured housing (a housing backlog, therefore, indicates the presence of families without accommodation, i.e., a housing shortage), in many countries including Indonesia, the fourth largest country in the world by population. In 2020, Indonesia’s backlog has reached a staggeringly high amount of 13.7 million units. This amount is slated to increase as Indonesia’s population is expected to increase to 305 million in 2035, a 30 million increase from current (2022) figures of around 275 million. This projected increase may be partly attributed to a demographic phenomenon known as a demographic dividend (better known in Indonesia as a demographic bonus), a ‘boom’ caused by a shift in the age pyramid. In short, there will be more working-age people (UNPFA definition: 15-64 years old) than those who are too young or too old to work. 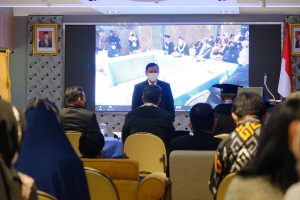 The demographic dividend is known as a bonus because an increase in the working age population can, under the right circumstances, become extra ‘helping hands’ for a nation, providing the latter with an expanding workforce, but in less-than-optimal situations they might instead be victims of employment and housing shortages. Unemployment aside, problems in the procurement and supply of housing are expected as a significant part of this 30 million people is predicted to be composed of workers and job seekers who a) earn non-fixed incomes and b) contribute greatly to an ever-increasing rate of urbanisation. In 2020, 56.7% of Indonesia’s population dwell in urban areas. 60.93% of them are workers in informal sectors who earn non-fixed incomes. Their non-fixed incomes could serve as an obstacle towards obtaining housing credits or loans from monetary entities (banks, etc.), thereby putting them at a risk of homelessness. This is exactly the problem that Yusuf’s proposal sought to remedy.

In Yusuf’s scheme, the Private Finance Initiative (PFI), which he deems an effective institutional model, is to be adopted and integrated into governmental systems as “PFI central units” which would increase the effectiveness and efficiency of Indonesian bureaucracy. The presence of a central unit in the structure of a PFI is a solution that allows the integration of Indonesia’s currently long, tedious infrastructure investment bureaucratic processes.

Ir. Yusuf thinks that rentable flats are a much more suitable type of housing for those with non-fixed income than landed housing. Such accommodations avoid the risk of the failure of payment [on the tenants’ or guarantor’s part], for the presence of PFIs as guarantors increases tenants’ bankability, thus allowing them to obtain housing credits. The scheme, a form of creative financing, transfers the risks from the government to private bodies or businesses and cuts on the duration of planning by increasing the efficacy of implementing the project.

The provision of rentable flats through PFI bodies is expected to procure 200,000 units per year, which translates to a 33.4% increase in housing procurement, with a 30% increase in investment from the private sector. The critical success factor of the procurement of housing for the part of the urban population earning non-fixed incomes lies in the effectiveness of facilities managed by local governments to that end, even if the flats would be built under the auspices of the Ministry of Public Works and Public Housing.

The dean of the Faculty of Engineering, Prof. Dr. Heri Hermansyah, ST., M.Eng., IPU., who led the examination granting a doctoral degree to Ir. Moch. Yusuf Hariagung, has this to say about the latter’s proposal: “We hope that the government may use PFI to encourage the private sector to invest funds in projects that promise good rates of return. The private sector, as we all know, still plays a very minimal role in the procurement of housing in Indonesia. PFI has been successfully adopted in England and Australia to overcome housing backlogs in both countries.“