Since being declared a tourist village by the Gianyar Regency Government in 2018, Kenderan Village, located in Tegallalang District, Gianyar Regency, Bali, has continued to develop the potential of the village, one of which is in the field of tourism through natural, cultural, and artificial attractions – such as trekkingtrails and trails. cycling. Thanks to this development, Kenderan Village gets into the top 300 of the Indonesian Tourism Village Award (2021) which was crowned by the Minister of Tourism and Creative Economy, Sandiaga Uno, in 2021.

Seeing the potential of Kenderan Village, the Universitas Indonesia (UI) Vocational Education Program carried out community service activities (pengmas) through the development of Greening Smart Tourism Village by Leveraging Circular Economy on Monday (27/06). The activity, which was supported by the UI Directorate of Community Service and Empowerment, was carried out by several UI Vocational lecturers across disciplines, which are Hadining Kusumastuti, S.Sos., M.Ak, CA, CMA, CRMP; Dr. Diaz Pranita, M.M.; and Mila Viendyasari, S.Sos., M.Sc.

Green and Smart Tourism which will be developed in Kenderan Village is a concept used to support digital-based sustainable development in tourism. In a broader and holistic context, green tourism is one of the concepts used in the development and management of a circular economy. It focuses on how business entities apply the principle of sustainable production in the overall tourism value chain in order to create a co-creation of experience, and is integrated into a tourism system that supports environmental sustainability.

The circular economy concept that will be adopted by Kenderan Village is expected to be unique compared to other tourist villages. This is adjusted to one of the issues that are faced by the people of Kenderan Village, which are household waste, agricultural waste, waste from the wood craft industry, plastic waste, as well as waste left over from religious or traditional ceremonies.

The Director of the Universitas Indonesia Vocational Education Program, Padang Wicaksono, S.E., Ph.D, gave his support for the community service activities. “In addition to implementing the Tri Dharma of Higher Education, sustainable community service activities are something that lecturers can do to provide many benefits for the community and the environment. The application of the circular economy concept is an option that is in accordance with Indonesia’s current environmental conditions, especially for Kenderan Village, Bali,” he said. 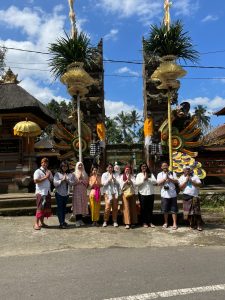