A team from the Faculty of Law Universitas Indonesia (FHUI), consisting of three students from the same faculty, namely Almer Theda Alana, Divka Talulla, and Gracella Maureen, has set a record for UI and our nation by becoming the first delegate from Indonesia to be admitted into oral pleading in the 19th Oxford Intellectual Property Moot Court Competition, and has in the same been included among the top 12.

Oxford Intellectual Property Moot Court Competition is one of the world’s most prestigious mock trial competitions in international property law, held this year in the University of Oxford from the 17th to the 19th of March, 2022. Every year, 30 teams are chosen for the first round through written submissions. The debated issues revolve around various regimes of intellectual property.

“We have carried out preparations from November 2021. From November to December we prepared written memorials to be delivered to the committee. Then in 31 January, alhamdulillah it was announced that we passed through the next stage of the written examinations, and that we are officially [invited] to discuss and defend our arguments in the competition,” Divka said, detailing the preparatory processes carried out by FHUI’s team.

During the competiton, FHUI’s team went throught four rounds, facing adverseries from universities around the world, including the Singapore Management University, Indiana University Maurer School of Law (USA), University of Greenwich (UK), and the University of New South Wales (Australia). FHUI’s team won 3 rounds, placing it in the 12th place among tens of the world’s most prestigious universities.

Every team were to bring forth three issues: copyright, passing off, and geographical indication. Among the things evaluated in the competition are argumentative method and logic, legal bases employed, and persuasive capability.

“A challenge is the presence of differences between legal systems.” England is a country with an Anglo-Saxon legal system, meaning that they place stronger consideration on past cases approved by judges, so that there are more cases that we need to read and be reminded of, while in Indonesia [we use] the Continental European system, which only considers laws. Our greatest challenge, therefore, is in adapting a different legal system such as this,” stated Graciella.

Gracella has furthermore, in the same occassion, offered her views on the current state of Intellectual Property Rights in Indonesia. Legal protection towards Intellectual Property Rights in Indonesia, according to her, is strong enough. The issue lies in socialisation: making regulations known by elements of society at large, that they may make full use and application of the various instruments law has to offer. “For instance, farmers in Indonesia or [their] agricultural products may find ways to protect their wares,” stated Graciella.

This triumph on the part of FHUI’s team, that of being the one and only team from Indonesia to be admitted into oral pleading, is inseparable from efforts spent by instrutors who have given the team instruction and guidance from preparations to the day of the competition. These instructors include Hesky Ondo Manurung, S.H., LL.M., and Anggardha Anindito (FHUI 2018). Also accompanying the team is Regita Eka Maritza, who acts as team manager.

The Dean of the Faculty of Law, Dr. Edmon Makarim, S.Kom., S.H., LL.M., has the following to state on this magnificent achievement, “I express feelings of gratitude and pride on this achievement that FHUI’s team has attained in the 19th Oxford Intellectual Property Moot Court Competition. As the first delegate from Indonesia to be admitted into oral pleading in the University of Oxford, FHUI’s team were capable of competing along with other students from the world’s most renowned universities.”

Edmond Makarim has also extended his most sincere gratitude towards the instructors and other parties who had proffered assistance to FHUI’s team during the span of competition and preparations. He hopes that the future will see even more laudable acheivements from the one students from FHUI have won.. 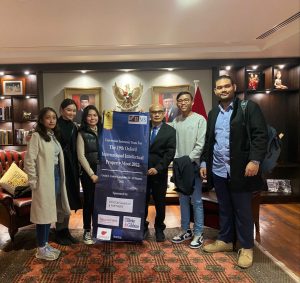