“When we explore terrorism, we are surfing the world of thought. This is because terrorism is not just a behavior, but a thought process that accumulates into a consciousness, then projected into a behavior,” said Head of special datacement 88 AT Polri, Inspector General. Marthinus Hukom, S.I.K., M.Si., in a public lecture entitled “Spectrum of Terrorism Threats in Indonesia” held online by the School of Strategic and Global Studies, Universitas Indonesia, yesterday (20/9).

According to Inspector General. Pol. According to Dr. Marthinus, Indonesia has the rule of law in legislation that underlies the way of acting and thinking as a “knife” of analysis related to the prevention and eradication of criminal acts of terrorism. The development of technology, thinking, and conflicts that continue to occur spur terrorism to develop into the digital era or information technology that is growing rapidly.

With the ease of use of social media today, the spread of information can become a place to facilitate crime. Therefore, the government continues to prevent and eradicate by revising laws, especially those related to terrorism.

Director of School of Strategic and Global Studies of UI, Athor Subroto, Ph.D., mentioned the need for great attention from the public to the threat of terrorism in Indonesia. “Terrorism can happen anytime, anywhere, and by anyone who has experienced the process of radicalism. So, I think this needs to be our concern to continue to be vigilant,” said Athor.

There are many things that need to be observed regarding the mode of operation of terrorism. This is important to provide new information that helps in the effort to eradicate terrorism in Indonesia. According to the Head of the Department of Terrorism Studies, M. Syauqillah, Ph.D., in the context of preventing acts of terrorism and terrorism networks or ideologies, the threat cannot only be prevented through a regulatory approach. This is because there are various kinds of media that have metamorphosed the terror movement to develop through the advancement of social media.

“Hopefully, in the future there are many programs that can be implemented to increase capacity related to efforts to prevent terrorism extremism and radicalism in Indonesia and abroad,” said Syauqillah.

There are national issues that currently affect the potential for acts of terrorism in Indonesia, including the issue of injustice (vertical and horizontal conflicts, conflicts over land rights, and ethnicity, religion, race, and intergroup); the issue of corruption among government officials and political figures; and the issue of intolerance. Through public lectures, the public is expected to gain insight into terrorism issues and raise awareness regarding efforts to prevent and eradicate acts of terrorism and radicalism in Indonesia. 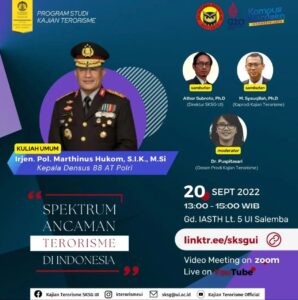