The development of industrial digitization has influenced the development of new transaction models in the current trading system, or what is known as Trading Through Electronic Systems (PMSE). PMSE is all forms of trade in goods or services that rely on electronic media technology.

The Organization for Co-operation and Development or known as the OECD (Organization for Economic Co-operation and Development) has made this a global problem that must be solved together. This problem was conveyed by promovendus Dr. Hendri, M.Sc., when presenting his dissertation entitled “Analysis of Income Tax Avoidance Practices in Cross-Border Digital Transactions in Indonesia” at an open session of doctoral promotion held by the Postgraduate Program in Administrative Sciences, Faculty of Administrative Sciences, Universitas Indonesia (FIA UI). 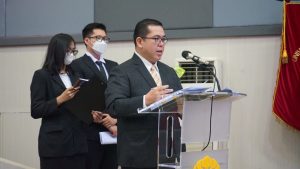 Research conducted by Hendri shows that most of the tax treaties in Indonesia still rely on the concept of physical presence as a condition for the formation of a Permanent Establishment (BUT). “The effectiveness of the implementation of the existing Multilateral Instruments is also highly dependent on the agreement of the countries involved in the agreement. Regulations related to the significant economic presence that exist in Government Regulation in Lieu of Law (Perppu) 1 of 2020 have also not been fully implemented,” said Hendri at the doctoral promotion session held on Wednesday (22/6).

According to Hendri, who is the 13th doctorate from FIA UI, the tax authorities have difficulty in regulating taxation rights on cross-border digital transactions that do not recognize jurisdictional and regional boundaries. “The concept of taxation which requires a physical presence as a condition for the formation of a BUT as regulated in many tax treaties is the main problem in this digital transaction model,” said Hendri.

He further explained that complexities in tax regulations, such as the issue of tax rates, the application of unclear rules, are other challenges that must be faced in this cross-border digital transaction. Quoting Harbolt’s opinion in 2019, cross-border digital transactions raise the potential for tax evasion. This condition makes it difficult to identify the nexus or tax connecting factor and the tax jurisdiction of the source country and income attribution in the absence of economic activity. Digitalization of trade has reduced the capacity of tax authorities to tax transactions and virtual market revenues because the development of regulations has not been able to answer various problems. “Second, by utilizing payment schemes through foreign media or platforms; this is due to weak supervision in the payment gateway system. Third, tax avoidance by practicing transfer pricing through a cost contribution agreement scheme related to the transfer of intangible assets in countries with low tax rates to then be licensed to entities in other countries, “said Hendri.