The conference’s discussion on energy transition focuses on methods to be used in the transition from fossil fuels to more sustainable sources of energy. This issue was discussed from the standpoint of the behaviour of humans who would potentially face the transition, in addition to conceptual ones. The conference also suggested policies that G20 member countries may undertake to encourage the transition. A team from the Faculty of Social and Political Sciences, headed by Dr. Sri Budi Eko Wardani, delivered insight from a policy standpoint. Dr. Sri stated that Indonesia’s wishes to transition into renewable and sustainable forms of energy is evidenced by the ratification, into Indonesia’s legal system, of the Paris Climate Accords in 2016. The ratification was followed by the drafting and enactment of Act No. 14 of 2016. This shows the Government’s — along with the Parliament and People’s — willingness to attempt use of renewable and sustainable sources of energy.

This willingness is also evidenced by parliamentary readings on a Bill for Renewable and Sustainable Energy (Rancangan Undang-Undang Energi Baru dan Terbarukan / RUU EBT) proposed in 2019. The bill’s legal substance, which is in itself a contentious issue among elements of civil society, is still under discussion. Issues raised by the Coalition of Civil Society covers not only one of the readings, but also the potential for legal clashes that may ensue should the bill be enacted.

Objections to this aspect of the policy resembles objections launched from an economic standpoint. This is due to the fact that fossil fuels currently requires lower amounts of costs than Sustainable and Renewable Energy. A team headed by Dr. Ir. Bambang Priyono, M.T. from the Faculty of Engineering, Universitas Indonesia, tries to approach problems surrounding the issue from a case study: the transition from motorcycles powered by petroleum to electric ones. Dr. Bambang made use of the occassion to reveal the main obstacle in the transition to sustainable forms of energy: the high costs incurred by consumers of sustainable energy. This drives people to keep using non-sustainable forms of energy due to their economic benefits. Dr. Bambang and his team then offered a solution in the form of a subsidised transition from petroleum to electric sources of energy.

“Subsidised transition of [sources of] energy can be achieved by removing funds allocated to petroleum subsidy and transferring them to subsidise electrical energy, a form of sustainable energy. Subsidies shall thus take the form of infrastructure required by electric motorcycles, such as batteries and spare parts. Subsidies may also be done by mass funding of swap batteries in order to facilitate the charging of electric motorcycles,” stated Dr. Bambang.

The use of electric energy is one of the objectives expected of the transition from fossil fuels. A gradual process is required to convince society to transition from fossil fuels. This process begins by accustomising the reduction of fossil fuel use in society. Emitted carbon dioxide would be transformed into energy through a process known as Carbon Capture and Utilisation (CCU) proposed by a team from the Faculty of Mathematics and the Natural Sciences led by Munawar Khalil.

CCU makes use of carbon dioxide generated by the combustion of fossil fules, transforming it into usable energy. The process works by capturing carbon dioxide in the air and processing it, through digital utilisation, into energy ready to be used. CCU is projected not as the end of the transition, but rather as a triggering point towards a more comprehensive transition of energy. 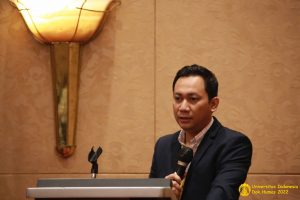 “CCU, in essence, makes use of carbon dioxide generated by fossil fuel use in order to create new energy. This indirectly leads to the decrease of the amount of carbondioxide generated by fossil fuel use. The use of CCU can, at the same time, be considered [a form of] transition for the use of renewable and sustainable forms of energy due to its use of carbon dioxide distributed within surrounding air,” stated Munawar.